This website or its third-party tools use cookies which are necessary to its functioning and required to improve your experience. By clicking the consent button, you agree to allow the site to use, collect and/or store cookies.
I accept
You are here: Home / Friends of GPS Hope / The Support Beam of Grace

When I got off the fifth-floor elevator and turned the corner, I saw what would become a memory forever etched in my mind. Kim was standing in the hallway outside of Becca’s room with that look I’ll never forget. I asked, “Did she make it?” and she just shook her head no and fell into my arms. Kim was twenty-four at the time, but all I saw was my baby girl, hurting that her big sister was gone. I just held her and cried.

While I had my own feelings of finality about losing my first child, my initial thoughts were concern for my family, and I found myself asking God to surround them with His love and comfort.

My eldest son, who grew up often arguing with his big sister, now lost his closest friend and companion. My baby girl in my arms was Becca’s maid of honor and dreamed of the day Becca would be hers. My middle son was thankful that Becca had made his wedding two months earlier, but now she would never meet any of her nieces or nephews that came along. And my youngest son, who was her ring bearer and now sixteen, would never get to have that adult relationship with her.

How was my wife doing? What about Becca’s husband? And how would my granddaughter do, losing her mom at nine years old? All this was swirling through my head as I hugged my kids in the hallway. Of course there was my own pain, but my concern was for my family.

The next several days were a fog as we prepared for a funeral and tried to somehow come to grips with what just happened. It was like living in a foggy black-and-white movie with the exception of some vivid moments that jump out in dull colors in my memory. Each day brought new pain as we looked through photos to prepare for the visitation.

I have written many checks before, but I never dreamed I would be writing a check to pay for my daughter’s burial plot! I could barely see through my tears to sign it.

Yet through all the sorrow, there were moments of great joy as well as we gathered as a family and told funny stories. It was very much an exhausting, emotional roller coaster.

After the funeral, we followed the hearse in 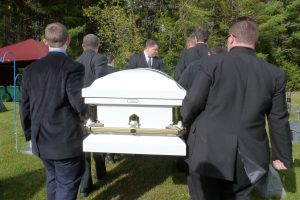 the processional across town to the cemetery. There we saw another one of those moments that jumped out of the fog. Seeing our three sons carrying their big sister’s coffin to the gravesite…there are no words to describe it other than this is just wrong!

Only a couple of days after I buried my daughter, it was time to go back to work. It was surreal as I was back in my normal surroundings and the world continued as it always had. Sure, a few people stopped in and gave me their condolences, but for the most part it was like nothing ever happened. I was still coming in and out of this fog. How do I go back to the day-to-day and act like nothing has changed?

It was not easy, and at times I would close my door and allow myself to tear up and grieve some more.

Where Grace Comes In 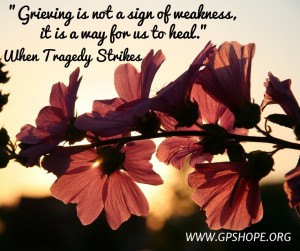 Grieving is not a sign of weakness, it is a way for us to heal.

I cannot overemphasize how important it was for me to make allowances for my family members, especially my wife, in the way they processed their grief.

My other four children all grieved in different ways and some longer than others. They all still have times when they miss Becca immensely. I encourage all of them to allow each other the space they need to grieve in their own way and not expect the others to grieve in the same way they themselves do.

Personally, I don’t always want to talk about it. I prefer keeping my feelings to myself, except with a few close people. My wife, on the other hand, seems to wear her grief on her sleeve. Laura would post all sorts of feelings on Facebook those first few years. I would every so often, but nothing like she did (or still does). I know it makes some people uncomfortable, even though she always points to God as her source of strength. I would sometimes think, “Is this normal or is my wife having some major issues here?”

Laura has one of the closest relationships to God of anyone I know. She amazes me with her insight, yet here she was struggling with so much intense pain, even though she knew without a doubt where Becca was and the glory she was experiencing. Was it normal for this to be so hard and go on so long? Truth is, absolutely!

I believe that, as devastating as the loss of a child is to a father, it is even more intense for a mother. There is no other relationship on earth like that of a mother and her child. We all know and understand how she carries that child for up to nine months in her womb.

But what we often miss is that not only is she carrying the body of another human being, but she is carrying inside her the very soul and spirit of that human being! Once that baby is born, the umbilical cord is cut and the child’s body is separated from mommy, but I believe that soul tie and spiritual connection is never cut. 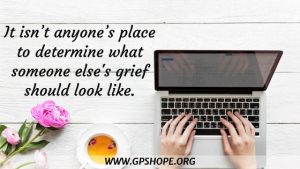 I think often as men we want to get past difficult things quickly and then “get on with life,” at least to one degree or another. But for the mothers, I believe in many cases, if not most, it will take months and even years, to “get on with life” the way we imagine they should.

It has occurred to me that often people, myself included, criticize those who post too many feelings on Facebook. I wonder, though, what we would think of King David’s posts if he were one of our “friends.” The Psalms look quite a bit like some Facebook postings, and they are plastered with his feelings!

Losing a child is like an amputation. A part of your very being has been cut off from you. You will never be the same, but you can learn to function again.

When Becca had her amputation as a toddler, it was one of the most traumatic things her little body could go through. There were times when she would feel phantom pains. It took a while for the body and brain to get used to missing that leg. It took time and strength and the will to carry on, but Becca learned to live her life, forever changed, but an amazing life anyway. She had a calling on her life, and losing that leg was not going to stop her.

It can be the same way after losing a child. It 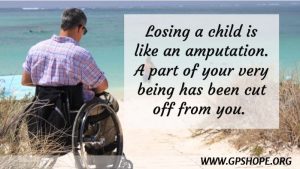 This article was adapted from Chapter 15 of When Tragedy Strikes. We hope this has given you some new insight as the door was opened just a crack, to see what it is like for a parent who has lost a child.

If this tugged at your heart and you would like to find out how to partner with Grieving Parents Sharing Hope (GPS Hope) in ministering to parents who have lost a child, providing free resources that give hope, light and purpose without judgment or shame in their long grief journey, click here.

GPS Hope exists to walk with grieving parents through the suffocating darkness of child-loss to a place of hope, light and purpose.

We also support families, friends and coworkers who want to know how to support these parents both short and long-term.