This website or its third-party tools use cookies which are necessary to its functioning and required to improve your experience. By clicking the consent button, you agree to allow the site to use, collect and/or store cookies.
I accept
You are here: Home / Expressions of Hope / Our Grief is Like…

There are many ways to illustrate what our grief is like after the death of our child. Here are the four that I seem to relate to the most.

I had a front row seat to this, since our daughter, Becca, had her little left leg amputated when she was only 3 years old, due to cancer in her bone (osteogenic sarcoma). Read her story here. She “recovered,” but her life was never the same.

There was obviously a major scar because 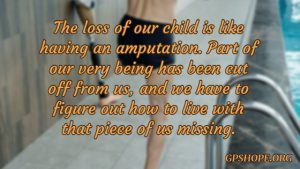 she only had a stump instead of her leg. She didn’t look like the other kids. She couldn’t run and keep up with them. She had limitations. Every day she woke up with the reminder that her leg was missing, and every day, sometimes multiple times a day, she had to be determined not to let it stop her from still having a fulfilling life.

With Becca gone now, there are constant painful reminders of that fact. I don’t look like other parents. I have a hard time keeping up with life sometimes because of my limitations.  Every day I have to be determined to not let her death keep me from having a fulfilling life with those who are still here.

If my three-year-old daughter could figure out how to live with a piece of her cut off, then so can I! She was the greatest example of anyone I know, who persevered and didn’t let something like an amputated leg keep her from still having a wonderful life for the twenty-nine years she had here on this earth.

After a while, you are aware it is there, but it doesn’t bother you as much. Then you move on to times where you consciously forget the rock is there as you go throughout your day. But whenever you reach into your pocket to grab something else, as your hand feels the rock, you remember…

Sometimes you bump up hard against something, and that rock cuts or bruises you again, and you are back to walking tenderly, waiting for it to heal.

Even if we change pants, the rock will always go with us, into the new pocket. 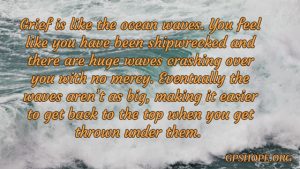 Eventually the waves aren’t as big, making it easier to get back to the top when you get thrown under them.

Calm waters eventually come, but there will still be waves and storms that send you swirling, being thrown underneath the water again, leaving you gasping for air. But each time, you get better at maneuvering through them. You also know they will stop at some point and the calm waters will come once again.

After a while, you are able to stand up and take some steps, even though you often stumble backward and fall down under the weight of the backpack. As you continue to struggle, eventually, you discover to your shock, that you are walking up the mountain. It’s hard, but you’re doing it.

The backpack of rocks becomes easier to carry as your strength builds. However, there are times you need to take a rest. Some rests are relatively short. Others take longer because you are once again feeling the full weight of what you are carrying.

The longer you climb, the easier it gets, and the fewer rests you seem to need. But you will always continue to have the backpack of rocks to carry and have the effects of it.

I have also learned that there are no “stages of grief” after a deep loss, like the death of one’s child. As an FYI, the five stages of grief were presented by Elizabeth Kubler-Ross for those who are terminally ill. They are the stages a person works through upon receiving the news that they are going to die. It was not for those who are still here after a loss.

So, with that, I have one more analogy.

Our grief is like a very tangled up ball of yarn and each of us has our own individual mess of yarn to untangle. I have knit since junior high, learning through 4-H, 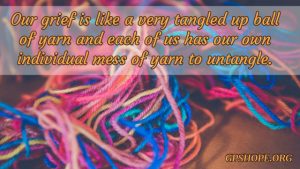 and have dealt with more tangled balls and skeins of yarn than I could ever count! There have been times the tangle was so frustrating that I quit trying and just put it away for another time. There have also been times I literally cut the yarn into pieces, trying to get it untangled (which made for a lot of ends to have to knit together)!

But eventually, whatever I was working on was finished and it brought joy to whomever it was intended for, including myself. One thing I have noticed, is that over the years I have gotten better at untangling the messes, and don’t have to cut it into pieces anymore.

Grief is hard work. Fortunately, it does get easier, even though we will deal with the pain of our loss for the rest of our time here on earth.

If you feel like you haven’t gotten very far and that you should be further along than you are, don’t allow yourself to get discouraged. You will get there, as you continue this unwanted journey, one step (or one tangle) at a time. 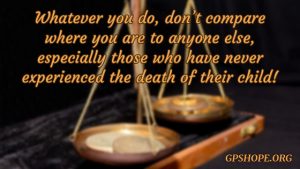 Whatever you do, don’t compare where you are to anyone else, especially those who have never experienced the death of their child! You are untangling your own messy ball of grief, and it is unlike anyone else’s. There is no right or wrong way and there are NO time limits!

Do any of these illustrations resonate with you? Let me know in the comments below. Also, maybe you can find a tangible item (or a picture) and put it somewhere you can see, to remind yourself that even though it might be really hard right now, as you keep going, eventually it will get better.

Do you struggle with guilt from your child’s death? We would like to send you the eBook, Ten Tips to Overcome Guilt. Just submit your name and email address below. You will also begin to receive a Weekly Word of Hope for bereaved parents (which you can easily unsubscribe from at any time).

Expressions of Hope is provided by 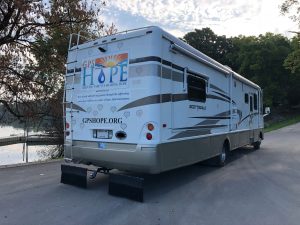 Grieving Parents Sharing Hope (GPS Hope). The founders, Dave and Laura Diehl, travel full time in their Hope Mobile (a 38-foot motor home) to be more easily available for speaking and ministry requests, and bringing intimate weekend retreats to bereaved parents. Laura is also a singer/songwriter and the author of multiple award-winning books.

If you would like more information about bringing Dave and Laura to you for an event, please send an email to office@gpshope.org.

If you are interested in bringing GPS Hope to your area for a weekend retreat click here.