This website or its third-party tools use cookies which are necessary to its functioning and required to improve your experience. By clicking the consent button, you agree to allow the site to use, collect and/or store cookies.
I accept
You are here: Home / Expressions of Hope / Is There Such a Thing as Grief Recovery?

Several years ago, in my searching for how to deal with my grief from the death of my oldest daughter, I came across an article called “Grief Recovery.” As I started reading it, I discovered it was for any kind of loss including jobs, moving, pet loss, death, divorce or any kind of breakup, starting school, etc.

It talked about how recovery is when we can have memories without the pain. I had a hard time reading it without getting angry. It is just impossible to compare grieving the death of a child to all these other things. I’m not saying those things are not painful and that there is not a level of grief involved, but this article was basically saying after you grieve the right way, you can move on with life and put the past behind you.

I might be able to move forward, but it isn’t by 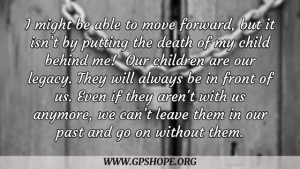 putting the death of Becca behind me! She will always be in front of me. Our children are our legacy. They are supposed to keep going when we leave this earth. Even if she isn’t with me anymore, I can’t leave her in my past and go on without her.

Even if we wanted to do so, the things that trigger us and remind us of our loss can come unexpectedly out of nowhere and bring back the memory, accompanied by unwanted pain once again.

I am a parent who took a lot of trips to the grave site for probably a year or more. One day while I was there, the med-flight helicopter flew over me. I totally lost it and found myself sobbing uncontrollably. Later, I wrote on Facebook about what had happened, and a friend told me it was a sign of PTSD (Post Traumatic Stress Disorder). I guess it made sense.

The last year and a half of Becca’s life she had around a dozen ambulance rides, because of her heart issues. For many, many months after Becca passed, whenever I heard an ambulance I would freeze in panic and my mind would immediately question, “Where is Becca?” And of course, there was always the realization of where she was, and the siren I was hearing was definitely not for her. 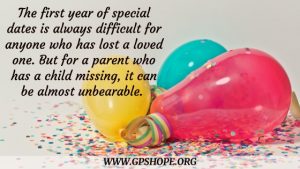 The first year of special dates is always difficult for anyone who has lost a loved one, but for a parent who has a child missing it can be almost unbearable. For us, Thanksgiving came first and brought with it the memory of how the year before, Becca had insisted on hosting the family, even though she was wheelchair bound. Then came Christmas, Becca’s favorite holiday, and then the pain of the first time she was not there to celebrate her birthday, and so on. Eventually it came around to the one-year anniversary of her death.

Everyone grieves differently, and I wanted to be sensitive to that. Some of the family wanted to get together and celebrate her life, and others didn’t want anything to do with that. I was torn, and to be honest I don’t even remember what ended up happening that first year for her birthday or the anniversary of her death.

The part I do remember, though, is a precious memory I now share with Becca’s daughter. That first year, my granddaughter asked what we were doing for her mom’s birthday. Knowing how some of the family did not want to do anything, I suggested I come to her school for lunch on that day and bring birthday cupcakes for the two of us. She was thrilled, and we continued doing it for a few years (until she hit Middle School).

What I wasn’t expecting was to have the second 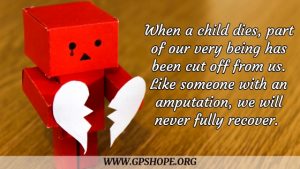 year be harder than the first! I see two reasons for this. First, I braced myself for those one-year markers. I knew they were going to be hard, so I tried to prepare myself for them mentally and emotionally. The second year it was more like I was caught off guard. I’ve been through this before; it should be better this year, I thought, so all of a sudden, those dates were here, and they just hit me like a brick wall.

Second, I was still in such a fog of unbelief the first year. So as the fog started to lift that second year, the loss was hitting me with full force. By the third year, it was more like a painful acceptance, trying to figure out how to live this new life without my daughter.

I feel like I need to say this to the parents who are still in deep grief. Do not look at any dates to see where I or others were emotionally in our grieving process and use it as some sort of a timeline to force on yourself. We are all on our own individual timeline and need to go through the process at our own speed. Yes, there are some “patterns” (for lack of a better word) that some of us seem to fall into, but don’t expect yourself to fit into that. Give yourself grace to walk your own necessary path. As long as you are putting one foot in front of the other, you will get there. 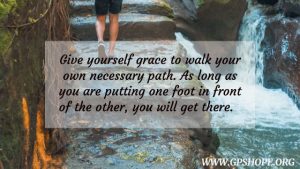 Grief recovery for a bereaved parent? No, not really. Yes, it is possible to get to the point where we can have memories without the pain. It happens gradually, but for the rest of our lives there will be times where the pain returns, because all we have are the memories of our child. The goal is to have that happen less and less, but it is naïve to think we will get to the point where we no longer feel pain within the memories and therefore have “recovered,” as the article I read suggested.

Like someone with an amputation, (which Becca had her leg amputated at three years old) we will never fully recover. But we can eventually learn how to live around it, adapting our life to that part of us missing.

If you don’t think it’s possible, that’s okay. Most of us thought the same thing, which is why we and others are here. We want to be that hope and light to you, like someone was to us.  So make sure you stay connected to those who are further down this path, who will always validate your painful loss, and share your memories, whether they come with tears, or a smile.

Do you find it hard to find ways to find comfort in grieving the death of your child? We would be happy to send you our list of thirty suggestions to bring ourselves comfort. Just submit your name and email address below. 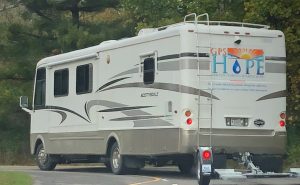 Laura is a national keynote speaker and has also been a workshop speaker for events such as The Compassionate Friends and Bereaved Parents USA national conferences, along with being a guest on radio shows, podcasts and other media channels such as webinars with Open to Hope.

GPS Hope exists to walk with grieving parents through the suffocating darkness of child-loss, guiding them to a place of hope, light and purpose.

We also support families, friends and coworkers who want to know how to support these parents both short and long-term.

other bereaved parents getting a Weekly Word of Hope delivered to their inbox.