People often forget that serving God should be fun. No matter what we do – whether we’re working our jobs, raising our families, growing our businesses, or serving in ministry – joy is one of the fruits of the Spirit that should be manifesting in our lives, and His joy is to be our strength. 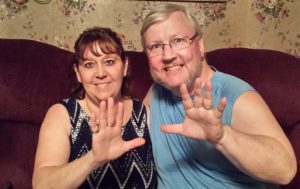 So much of what’s out there these days lacks personal connection. Most people are simply afraid to really be themselves. I thought I’d have a little fun with this update, put away the polish, and share another side of Dave & myself and the work we do in order to prove we’re very real and human, and not always serious.

Here are 10 of our quirks, some closely guarded secrets, and some weird trivia we hope you will find interesting.

1. I fell out of a second story window at 3 years old, landing on the ground below, with no broken bones or major injuries.

2. I only liked the smell of coffee (couldn’t drink it, yuk!) until just a few years ago, when my daughters introduced me to coffee shops with flavors to vastly improve the taste. My two favorites are white chocolate peppermint, and pumpkin spice.

3. I have reading glasses from the Dollar Store in almost every room in my house, so it doesn’t matter if I misplace them.

4. One of the memories my kids still like to laugh about me doing (and still share with others) happened in the day of cordless house phones. I was hitting the button on the receiver stand to make the phone beep, so I could find wherever someone had left it lying in the house from last using it. Everyone started laughing at me, because the phone was hung up on the stand right next to the button I was pushing.

5. When I was really little, I wanted to be a clown when I grew up, and would stand in front of the TV and imitate them.

6. I used to embarrass my mom when I was a toddler. Evidently, I loved the feeling of the ears of our two English Setter hunting dogs in the back yard. My mom would hear them yelping and whining, come to the back door and yell “DAVID! STOP BITING THE DOGS!”

7. When I was three I was playing jack-in-the-box with my friend in a suitcase. I ended up locked in the suitcase and miraculously my mom turned off the vacuum cleaner upstairs and heard my muffled cries for help before I passed out. I would never again be a jack-in-the-box, and choose a different vocation later in life.

8. At age nine, I amazed my family by winning a 2nd place trophy at a local golf tournament. My brother was less impressed when he discovered there were only two people in my age bracket.

9. My wife and I own an NFL team. Yes, we are shareholders of the Green Bay Packers! Even though our shares have no financial worth, it is by far my favorite investment.

10. We were married April 28, 1984 which happened to be the last time daylight savings time started at the end of April. I have forever felt robbed of losing an hour on my wedding night!

Okay, I’m headed back to get some work done, but I’d love to hear a bit about you! Here’s to summer fun 🙂

Summer is a good time to make an effort to slow down and enjoy life. If you would like some ideas on how to do that, we would like to send you Seven Tips on How to Slow Down and Enjoy Your Life. Just submit your information below.

Scripture. There’s nothing as life-giving as God’s Word. Recently I heard about “The Hand” illustration to making Scripture an everyday part of one’s life.

If you are like me and haven’t heard of “The Hand,” the premise is that each of these 5 practices gives you a strong “grip” on the Word of God, as if each of these represent one of your fingers (and thumb, of course):

While I love to share Scripture the most, I’ve also 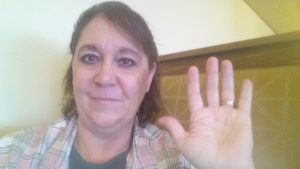 been encouraged and inspired by several quotes I’ve read in books or heard in sermons throughout the years.

These don’t take the place of Scripture (obviously!) but these quotes have given me perspective, hope, and encouragement in my day-to-day life, and I hope they do the same for you wherever you are reading this from.

The little things are the big things. Unknown. (I have seen many variations of this quote.)

Faith and fear both demand you believe in something you cannot see. You choose! Bob Proctor

I don’t know what tomorrow holds, but I know who holds tomorrow. Unknown. (Joyce Meyer has a variation of this.)

If you’re looking for some other great reads, don’t forget to check out my previous article: 3 of My Favorite Books – Have You Read Any of These?

What are some of your favorite quotes? I’d love to hear them – share below! 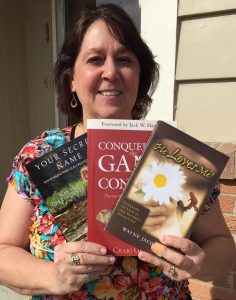 Several years ago, I thought I was pretty secure in my identity in God, but after our daughter, Becca, died, I discovered how little I knew about it, much less how to live securely from that place.

As Dave and I continue as missionaries in the dark field of grieving parents, I am very thankful God has been shedding so much light, making me more and more solid in my identity of being fully loved by Him than ever before.

One thing that God used to open my eyes to receive this needed revelation I thought I already had, is a good book. Actually, there were several!

If you’re in a season of feeling a little spiritually disoriented, looking to deepen your walk, or just want a good read, consider checking these out. There are tons of great titles out there, but these were really meaningful to me.

Book 1: He Loves Me! Learning to Live in the Father’s Affection

So many Christians believe God’s love is fickle: when they sin, He turns away in disgust and anger. They vacillate between “He loves me” and “He loves me not” because of their behavior. That reasoning, writes Wayne Jacobsen, is as flawed as pulling petals from a daisy. Rather God’s love is sturdy, enduring, and undisturbed by people’s failings because God loves humankind not for what they do–but who they are. They are God’s beloved creation.

The book opened my eyes to how I was still trying to earn God’s love when I didn’t realize that is what I was doing. He really does love me, unconditionally, just the way I am, and I am still learning how to live in a way that sets me free, knowing how fully I am loved.

One of my favorite quotes from this book is, “One can be a good Christian by embracing its doctrines, its rituals, and its ethics without ever knowing him. Jesus did not come to start a new religion, he came to break the power of them all by inviting us to follow him and live in the reality of his love for us. Just remember, life in Christ has more to do with following a person than it does following the rules.”

Book 2: Conquering the Game of Control: Nurturing the Nature of God

All humans, by nature, are doomed to play an unwinnable game which looks remarkably like the harmless game of Rock/Paper/Scissors, but is, in reality, played out with the weapons of domination, manipulation, and intimidation.
Like the game of Rock/Paper/Scissors, there are no real winners; only victims who feel crushed, cut, or covered by the process—or ominously empowered by it. What is the solution? To quit playing the game altogether! God does not “play the game”. Through Him, humans can be transformed until the game of control gives way to a life of mutual submission—the dance of relationship rather than the dissonance of control.

This book has affected me in a way that few other books have. It opened my eyes to so many things that I needed to see about myself and relationships, and gave me the desire to release things I had been holding on to that were interfering in living out my true identity in Him.

One of my favorite quotes from this book was, “The great good news is that, in Jesus, we can expect a change that is so deep, so transforming, that we actually interact with people in a whole new way, with love and humility and truth – in authority, rather than the old ways of domination, intimidation, and manipulation – in control.”

Book 3: Your Secret Name: Discovering Who God Created You to Be

Using the story of the biblical patriarch Jacob as a backdrop, author Kary Oberbrunner calls us to stop accepting the world’s labels and start wrestling with God to discover our true identity. Jacob spent years living out the meaning of his earthly name: “deceiver.” Caught up in pretending to be someone he wasn’t, he was unaware that God would build a nation through him, unaware that Jesus would be one of his descendants, unaware of the lands he would inherit. Then he heard God speak his true name and the future God had for him unfolded. In Your Secret Name, we are reminded that we’ll be unable to discern what God wants to build through us until we discover how God has seen us all along. Readers will find the courage to abandon what they know in order to become who they were born to be.

One of my favorite quotes from this book was, “Interesting how Jacob asked for a blessing and the angel responded by asking him his name. Perhaps within that exchange, we stumble upon a secret. Seems like many of us crave a blessing – we want God to bless us, our families, our jobs and our finances. Instead, God knows our only shot at a true blessing comes by uncovering our true identity.”

What are some of your favorites? I’d love to hear them — especially if you’re in a season of learning who you are in Him and how deeply loved you are. Leave a comment below!